Academics and other well-known investors have long touted the advantages of buying companies at a discount relative to fundamental measures of value, otherwise known as value investing. In fact, it seems quite logical – who doesn’t like a bargain? And despite periods of underperformance, such as the late 1990s, this approach has paid off over the long-term as value stocks have outperformed growth stocks.However, over the ten-year period ending in December 2018, growth equities have cumulatively outperformed value equities by 126% (315% vs 189%)¹. This recent performance gap, which has continued on into 2019, has left many investors wondering if value investing is dead; merely a relic of the past. We don’t believe so.
In the following pages, we highlight some of the emerging similarities that we see between the current market environment and the late 1990s. In addition, we will explore some of the explanations for why investors have rewarded growth stocks over value stocks since the Global Financial Crisis, and why this has accelerated over the past several years. For investors who’ve benefitted from the strong rally in growth stocks, history suggests it may be prudent to reallocate profits toward value stocks, where valuations are much more reasonable and future returns are potentially more favorable.

One result of growth’s decade long performance run is the widening of the valuation gap between growth stocks and value stocks. As was the case in 1999–2000, we believe this valuation gap is creating the backdrop for a new market cycle in which value stocks, especially those priced at historically wide discounts to the broader market, begin to outperform their growth counterparts.
While there are differences between the late 1990s and now, there are also noteworthy similarities, especially when it comes to the valuation of growth stocks. For instance, as shown in the charts below, the Price to Earnings (P/E) ratio of the most expensive quintile, or top 20% of the market ranked by P/E, has exceeded peak levels last observed in 1999. This is also the case when stocks are ranked by the Price to Book Value (P/BV) ratio, where the P/BV for the top quintile recently surpassed the prior peak reached in 2000. 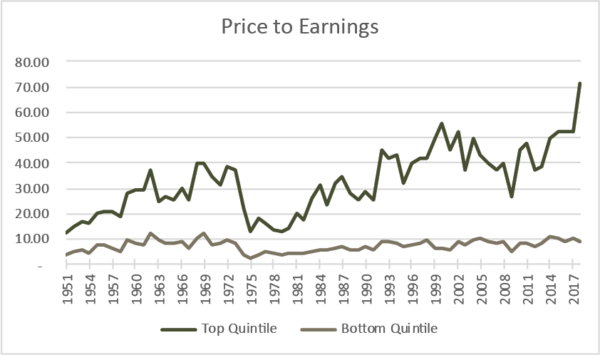 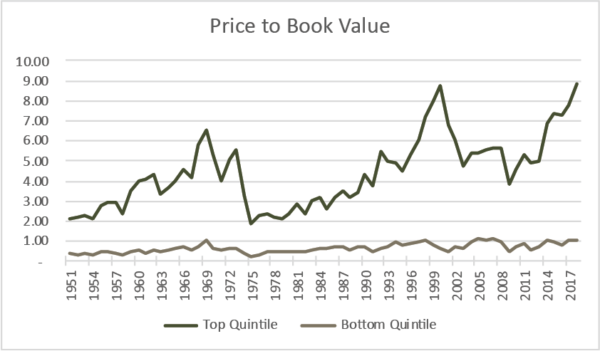 As the most expensive stocks in the market have become more expensive, the least expensive stocks (the bottom quintile) have remained relatively stable as measured by these two valuation characteristics. This has resulted in a historically wide gap between expensive and cheap stocks, as noted in the charts below. Just as the P/E ratio for the top quintile of stocks has exceeded prior highs reached in 2000, the spread between the most and least expensive quintiles has also reached new highs. A similar situation is developing for the P/BV spread, where current levels are near the prior peak reached in 2000. 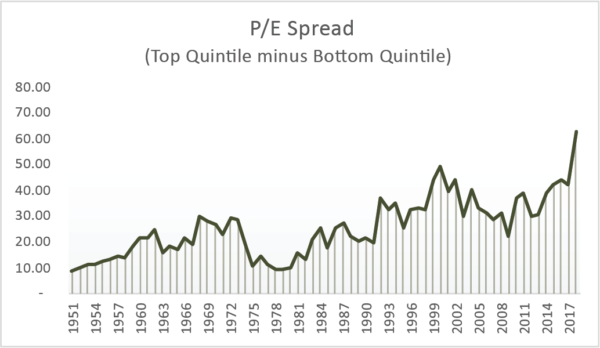 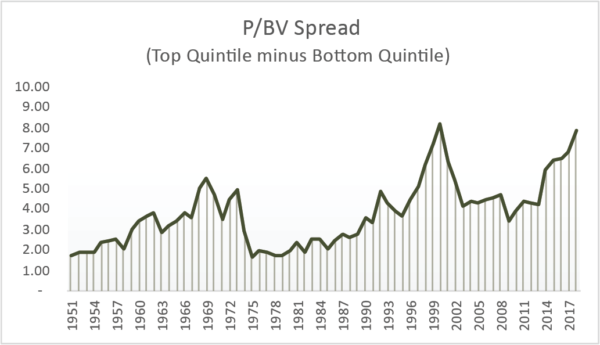 Similar to the period following the 1999-2000 dot-com bubble, the magnitude of these valuation gaps is unlikely to persist, thus causing investors to shift capital away from pricier growth stocks and toward companies that can be purchased at more reasonable valuations – i.e. value stocks.

Unsurprisingly, these valuation dispersions have caught the attention of investment bankers who are encouraging investors to abandon earnings as the yardstick for measuring business value and instead rely on measures of growth in users and sales. User-based and sales-based metrics were also popular tools for justifying the inflated valuations of technology stocks in the late 1990s.
According to research from Jay Ritter, a finance professor at the University of Florida, more than 75% of the companies that went public in 2017-2018 were losing money. Since 1980, and as shown in the chart below, the only other time when more than 75% of companies involved in IPOs were not generating profits was in 1999-2000, when the dot-com bubble peaked and burst.

% of IPOs with Negative Earnings 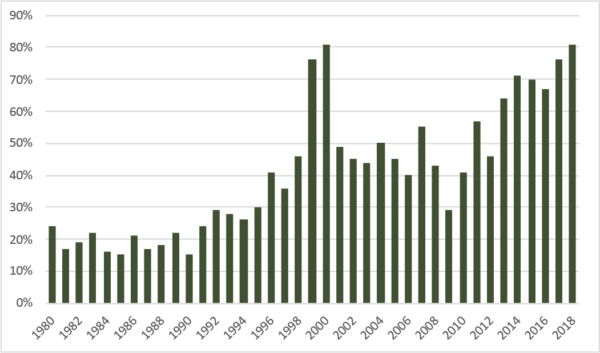 The tech-heavy Nasdaq Index housed most of these dot-com era IPOs and from its March 11, 2000 peak to its October 9, 2002 low, it declined by 77.9%4. While many of the companies going public today are larger and more mature than those from the class of 1999-2000, the current trends in business valuation seem far from conservative.

So, what explains growth’s relative outperformance over the past decade? We believe the combination of low interest rates, anemic economic growth, and the emergence of platform companies created the ideal environment for growth stocks, thus leading to their outperformance relative to value stocks and to their currently high valuations. Interestingly, we see evidence that each of these performance tailwinds for growth stocks are abating or reversing.

Growth stocks are similar to long-duration bonds in that the majority of their expected cash flows and earnings are forecasted to come far in the future. Mechanistically, when interest rates decline, investors will often lower the discount rate they apply to a growth stock’s future earnings and then bid up the company’s stock price to reflect a higher net present value. Value stocks often see less of a benefit from falling rates because a greater portion of their stock market value is explained by near-term earnings, which are less sensitive to changes in discount rates.

During the last decade, interest rates declined to record lows in 2016 and then began rising in 2017-2018 as the Federal Reserve increased the benchmark interest rate. In 2019, however, the Federal Reserve reversed course and cut the benchmark rate in response to slowing economic growth. Interest rates have now fallen back to 2016 levels and the yield curve has intermittently inverted. The fact that rates have already fallen back to record low levels may suggest a low probability of further declines. If interest rates are assumed to be stable-to-rising from current lows, then the relative performance headwind from declining rates that value stocks have faced over the last decade is unlikely to repeat in the coming years.

Growth stocks have also benefitted from the stock market’s tendency to favor what is scarce. Compared to prior economic expansions, the current expansion has been somewhat anemic and led investors to excessively bid up companies capable of generating high levels of sustained growth in sales and, to a lesser extent, earnings. As economic growth becomes more pervasive, its scarcity value declines and investors may begin to shift their focus back to valuation as a driver of investment decisions.

A final driver of growth’s outperformance over the last decade relates to the dominance of so-called platform companies such as Amazon, Netflix and Google. These companies have successfully disrupted multiple industries and gained dominant market share at an unprecedented rate. Many stocks in the value indices have suffered from an inability to adapt, or better yet, embrace the technologies and strategies these platform companies use to win business.

History, however, suggests that important innovations eventually diffuse throughout the economy. While valuations and investor expectations may be dire at times for competing companies, we see evidence of industry incumbents, such as Walmart and Kroger, adapting to the threats posed by these platform companies. As the incumbents adapt and innovate, capital begins to flow back toward these companies (many of which are included in the value indices), thus reducing another tailwind for growth investing.

By definition, growth stocks tend to have higher expected earnings growth rates than value stocks.
As a result, investors are willing to pay a premium (i.e. a higher multiple of potential future earnings) for growth stocks than they pay for value stocks. Based on the historical data used in the initial set of charts above, the long-term average spread (from 1951 to 2018) of the weighted average P/E ratio between the most and least expensive quintiles of the market is 25.5 (an average P/E of 32.9 for the most expensive stocks and 7.4 for the least expensive).

What’s remarkable today is that this valuation spread between the Russell 1000 Index quintiles stands at 61.3, more than twice the long-term average for the market as a whole – yet the difference in the long-term median expected EPS growth rate, as shown in the table below, for the same two quintiles of stocks is a mere 3.1%
(12.6% vs 9.5%). 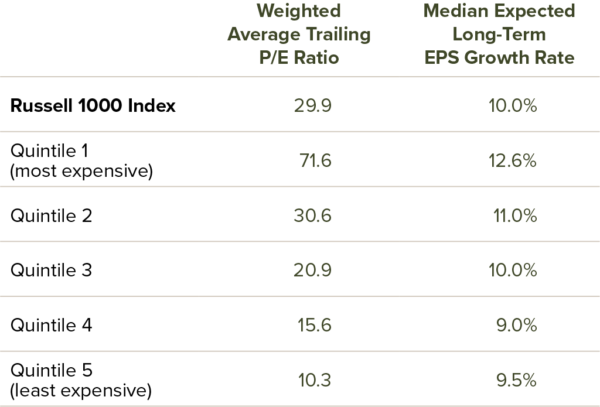 In other words, investors are willing to pay an increasingly higher premium for a modestly higher expected long-term EPS growth rate. We interpret this anomaly to be another signal that pressure is building for deep value stocks to start outperforming more expensive growth stocks.

Investing Over the Long-Term is About Math, Not Popularity

Not surprisingly, fund flows for actively managed value strategies have been negative, many noteworthy value managers have closed shop, and technical selling pressures have been persistent. The strong fund flows into passive indices, which are usually market cap weighted, creates further market pressure to bid up the biggest stocks, irrespective of their valuations. As the 18th century banker, Baron Von Rothschild, purportedly said, “You want to buy when there is blood in the streets.” Value investors have been bloodied, particularly over the past several years. We believe these technical selling pressures will eventually stabilize and ultimately reverse.

Most importantly, we believe the current math is highly favorable for deep value investing. For example, the portfolio of stocks we hold in the Poplar Forest Partners Fund is currently trading at a 38% discount to the S&P 500 Index on forward P/E and a 55% discount on P/BV as of June 30, 2019. And as we know, the return potential for any stock or portfolio can be mathematically attributed to changes in valuation, such as the forward P/E ratio, and changes in fundamentals, such as earnings growth and dividend yield.

We expect our companies to generate long-term EPS growth of 9-10%, which, when combined with an estimated 2.5% dividend yield, could potentially generate a fundamental return of approximately 12%. This fundamental return assumes no change in valuation. With the portfolio valued at a meaningful discount to the market, we think a good argument can be made for valuation ratios to rise, not fall, especially for the deep value segment of the market where the portfolio has meaningful exposure. Compared to the S&P 500, nearly 60% of the Partners Fund’s investments are in the bottom quintile (deep value) based on P/E or P/BV5.

In summary, we believe the tailwinds for growth investing are easing, and possibly shifting in favor of value stocks. At the same time, valuation spreads are at or above historically wide levels while the fundamental earnings growth prospects for value stocks are strong on both a relative and absolute basis. While the last decade has been favorable for growth stocks, we believe the shifting winds will bring investors’ attention back to value investing.

1Represented by the Russell 1000 Value and Russell 1000 Growth Indices.  2http://mba.tuck.dartmouth.edu/pages/faculty/ken.french/data_library.html. P/E is the weighted average for a value weighted portfolio based on trailing annual earnings before extraordinary items.
3Source: https://site.warrington.ufl.edu/ritter/files/2019/01/IPOs2018Statistics_Dec.pdf. Ritter’s data excludes a number of atypical company types, like real estate investment trusts and special purpose acquisition companies. His methodology and data can be found in the link provided.
4Source: Nasdaq / Capital IQ.
5Source: Capital IQ. Based on trailing P/E and P/BV data as of 6/30/19.