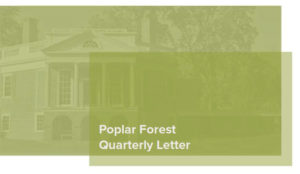 The key to investment success this year has been simple: buy the most expensive stocks and avoid the cheapest ones. That’s not what we do at Poplar Forest and our investment results reflect our continued commitment to a value-based investment process. While we’re concentrating on stock prices relative to long-term normalized earnings and free cash flow at the company level, investors currently seem to be focusing on short-term macroeconomic factors. The pre-occupation with recession and risk is understandable, but I believe it has been taken to an unreasonable extreme.

Risk is a key input to our decision making process, and when we think about risk, we look at variables like balance sheet strength and the sustainability of free cash flow. In contrast, the market seems more focused on volatility as a definition of risk. Volatility describes the magnitude of fluctuations in a stock’s price. In a risk-averse environment, investors flock to stocks that have historically been more stable while avoiding those with big ups and downs. I think this herd-like behavior is making supposedly safe stocks dangerous. Investments perceived as safe (low in volatility) are trading at very expensive levels while those deemed risky (value stocks) are trading at record discounts to the market. In my opinion, this re-pricing of perceived risk has created opportunity for value investors.

Our analysis suggests that value stocks could rise by 30-40% relative to the market if current valuations revert to historical averages. Deep value investments typically trade at a 3-4 P/E point discount to the broad market because the underlying companies are usually either slower growing, more capital intensive and/or more cyclical in nature — today that differential is around 7 P/E points.

I’ve been through this before and the major takeaway from that late-90’s experience was the importance of sticking to process. Contrarian value investing isn’t sexy and it can be lonely, but I remain convinced that the strategies we follow at Poplar Forest will generate market-beating long-term returns. With 95% of my personal investable assets in Poplar Forest funds, I understand as well as anyone that our recent performance has been disappointing. If I thought there was a better way to invest, I’d pursue it. With our portfolios at record valuation discounts relative to the market, I see unprecedented potential for outperformance.

As you can see in the table above, as of 6/21/19, the cheapest stocks in the S&P 500 have not nearly kept pace with the most highly valued shares. While financial risk is similar and the growth rate differential is surprisingly low, the most striking difference between cheap and expensive stocks is beta  (a measure of risk). Theoretically, a stock with a beta of more than 1.0 should rise at an above average rate in a bull market and decline more than average in a bear market. That has not been the case this year. The winning strategy has been one of paying up for perceived safety (particularly low volatility). With ongoing trade wars, geopolitical tensions and slowing economic growth, it is understandable that investors would be willing to pay a premium for perceived safety.

All else being equal, a rapidly growing business is more attractive than a mature one and deserving of a valuation premium. Likewise, a lower risk stock deserves a premium relative to that of a high-risk enterprise. That said, current premiums seem excessive. A recent report from J.P. Morgan titled “The Value Conundrum” suggests that investors are paying a record P/E premium for low volatility stocks relative to the market as a whole or as compared to their high volatility brethren. According to J.P. Morgan’s report, as of 5/31/19, on a P/E basis relative to the S&P 500:

Meanwhile, value strategies are as cheap as they’ve been in a generation:

My parsing of this data leads me to the conclusion that the majority of investors appears to be positioned for a recession and an accompanying bear market. Central banks, especially those outside the U.S., have kept interest rates at what I consider ridiculously low levels in order to stimulate risk taking, inflation and economic growth. Investors continue to clamor for cuts despite evidence that easy money policies have failed to achieve their goals. Over the last 12 months (as of 6/21/19), defensive stocks (think utilities and REITs) have outperformed economically exposed stocks by more than 17% (Russell 1000 Defensive Index +17.72% compared to +0.55% for the Russell 1000 Dynamic Index).

The continued shunning of value stocks has driven them to their lowest relative valuations in a generation. Given the Global Financial Crisis was the last bear market we’ve lived through, it is understandable that worried investors would look back at that experience for clues about how to act today. In that debilitating bear market, value stocks went down approximately 4% more than the broad market as opposed to the more muted decline that investors expected. I think the 2007-2009 experience taught today’s investors to avoid value stocks when they get worried.

Starting valuation has a monumental impact on subsequent returns and value stocks weren’t particularly cheap in 2007. As a result, their underlying economic exposure wasn’t cushioned by a value-based margin of safety. Investors expected value stocks to provide protection in a downturn but it didn’t work out that way; they don’t want to make that mistake again.

The story was quite different in the late 1990s. Then, as now, value stocks were unloved and they traded at huge discounts to the market. When the tech bubble burst in early 2000, value stocks kicked off a tremendously rewarding eight-year run. The valuation differentials we see today are much more reminiscent of what we saw in 1998-1999 than of 2007-2009. Given the current differentials, value stocks appear to offer relative downside protection and potential for years of out-performance.

As you can see in the chart below, the cheapest stocks in the market, as measured by their price-to-book value ratio, trade at a discount consistent to that seen in late 1999 (as of May 31, 2019). 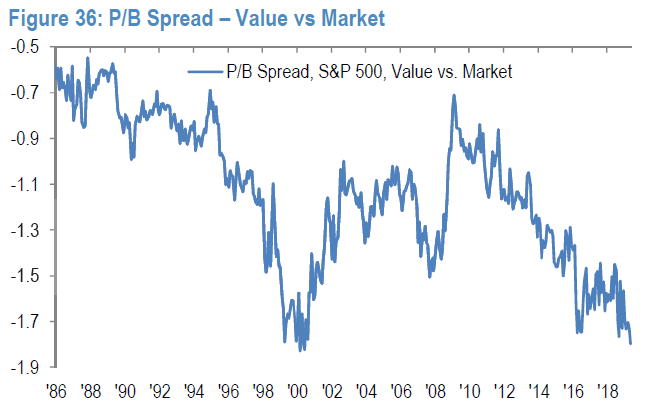 Similarly, the cheapest stocks in the market, as measured by their price-to-earnings ratio, are also valued as they were in late 1999. 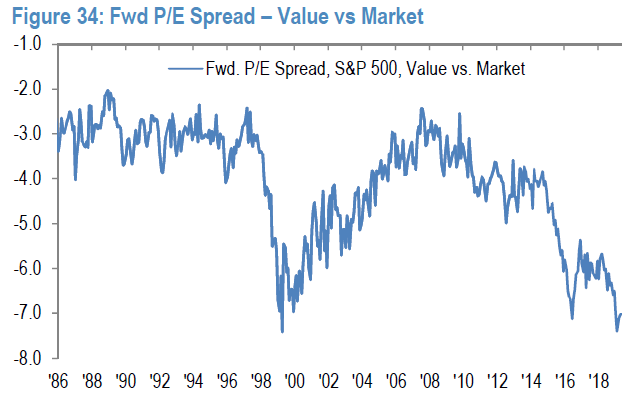 Maybe the market is telling us that investors believe that cheap stocks are about to see their earnings decline as we head into a recession. A 25-30% recession-driven reduction in earnings would bring valuation back in line, but in our opinion, stocks should not be valued based on short-term, recession-influenced earnings — it is the long-term that matters.

From a long-term perspective, valuations seem out of whack. Investors’ risk aversion has created a valuation disconnect of historic proportions. The combination of premium prices for supposedly safe “low volatility (Low Vol)” shares and discounted prices for supposedly risky value stocks has created the widest ever differential — greater even than what was experienced during the tech bubble. In those days, the argument was between growth and value; today, the dispute seems to be between safety and value. The unwinding of this safety trade could be monumental! 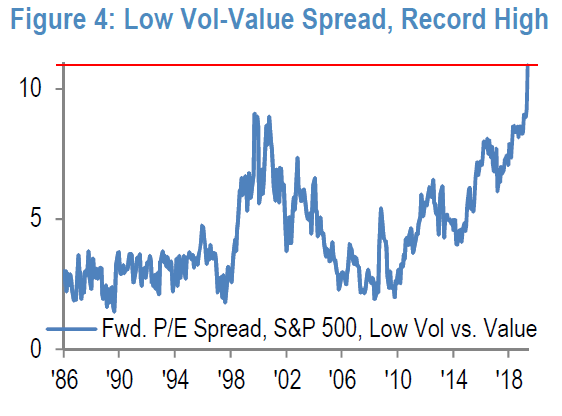 Investors fleeing value while seeking safety has presented us with opportunities too good to pass up. We have admittedly been early as what had looked like bargains when we bought them became even more attractively valued. Given this, our portfolios are trading at the largest ever discount to the market, despite what we believe are comparable expected long-term earnings growth rates. 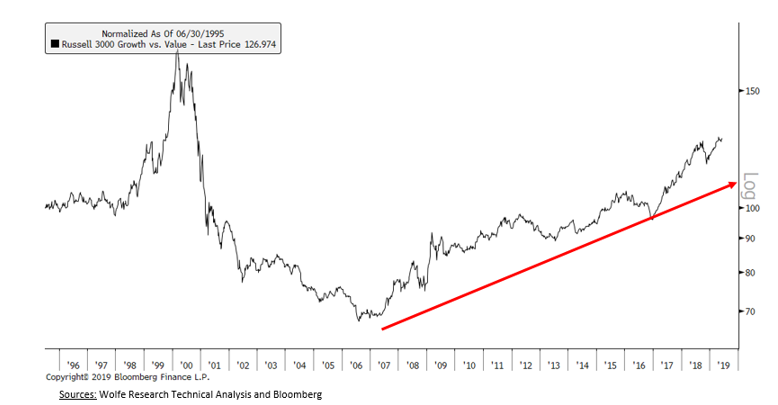 I don’t know when or why the safety trade will unwind, but investing is cyclical and something is bound to cause a change in trend. I don’t remember a seminal event in 2000 that marked the peak in growth stocks, but maybe conditions simply got to an unsustainable extreme. Perhaps there is some sort of investment law of gravity that brings high-flyers back down to earth. The trend away from value and towards growth and “low risk” stocks is now in its 12th year. The valuation disparities discussed in this letter suggest the end of this trend is nearing, but we won’t be able to accurately pin-point the turn until we’re on the other side of it.

In an environment like this, staying power is key. Excluding a couple of exceptions, the companies in which our collective monies are invested are all generating free cash flow. 90% of the portfolio is invested in companies with investment grade debt ratings. Our companies have staying power and, though their stock prices may be depressed, they can use free cash flow to pay dividends, buy back stock and/or reduce debt. Buying back stock at a discount to fair value can increase shareholder value in the long run — the longer these stocks stay cheap, the bigger the ultimate potential payoff.

I know a recession-driven bear market is coming. I just don’t know when. And neither does anyone else. History suggests that an inverted yield curve is a dangerous warning sign, so maybe a recession is coming in 2020. Conversely, history also suggests that politicians are particularly “pro-growth” during the presidential election season and we’ll enjoy smooth sailing at least until election day — perhaps we’ll get a ceasefire in the trade wars or a transportation spending bill. I’m less focused on politics and more attentive to the behavior of the Federal Reserve. Outside of the bond market, I don’t see excesses in need of correction. The economy isn’t too hot. The Fed does not appear to be trying to slow the economy and, until they do, I think we’ll muddle along with 1.5-2.5% real GDP growth and 1.5-2.0% inflation — similar to what we’ve lived with for the last decade. While 2% growth is a downgrade from the 3% rate we saw in 2018, a far worse forecast seems to be reflected in the stock prices of the companies in which we’re invested.

We will continue to pay attention to the general economic environment, but we won’t let short-term worries over-ride our bottom-up investment process focused on stock prices relative to long-term normalized earnings and free cash flow. We are cognizant that a recession is likely to occur sometime in the next 3-5 years and we include an assessment of recessionary downside in our analysis of individual companies. Though the results of our efforts have been disappointing in the recent risk-averse market environment, with valuation discounts back to levels seen in 1999, we believe the stage is set for a multi-year run for value investing strategies. Our portfolios trade at the biggest discount to the market we’ve seen since I started Poplar Forest in 2007 and I expect tremendous outperformance when investor risk aversion fades.