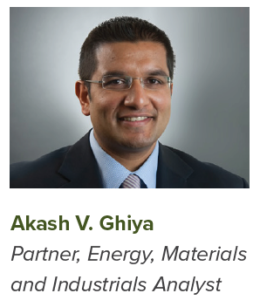 In this edition of Analyst Insights, Akash Ghiya explains the pillars of our investment thesis in the Energy sector, reviews the sector’s 10-year history, and discusses the key issues on investors’ minds in 2019.

What are the critical insights that give you conviction our energy investments will generate favorable returns?

First, I would highlight valuation. Investor sentiment is decidedly negative, and the Energy sector is now priced at a 30-year low on price-to-book ratios. Our energy investments are cheaper still and currently trade at a 15% discount to the sector.

Second, we believe book values and cash flows for the companies we own are likely to inflect higher in 2020 which suggests that, even if valuation doesn’t improve, we can still earn decent fundamental returns from growth in book value and cash flows. Should valuations normalize, the returns could potentially go from good to great.

Finally, in terms of a high-level insight, I believe investors may be overestimating growth in global oil supplies over the next few years. In response to rapid U.S. oil production growth, foreign oil companies haven’t been developing new oil fields to replace their current production. Since 2014, oil related capital investments outside of the U.S. are down almost 40%. While this trend is just starting to reverse, it often takes multiple years to develop new oil fields abroad. Investors may be underestimating the pace at which foreign companies can ramp up oil production in order to offset the relatively high rates of decline that U.S shale fields experience. Lower than expected growth in global oil production could help offset pressures on oil prices from a potential slowdown in economic growth.

The energy sector has seen a lot of change over the last 10 years. Can you give us a quick summary of the sector’s evolution?

Sure thing. The three critical factors that drive energy markets are supply, demand, and marginal production costs. Since most of the sector’s value is tied to companies participating in global oil markets, let’s focus on oil to help simplify our discussion. If we rewind to 2008-2009, per-barrel oil prices fell from a high of about $150 to a low of around $30 on weaker than expected demand stemming from the global financial crisis. Prices then quickly recovered to over $100 during the ensuing years as economic growth, particularly in China, rebounded. Geopolitical concerns tied to the “Arab Spring” and a revolution in Libya created actual and perceived supply constraints. The result of strong demand growth and constrained supply was a multi-year period of oil prices well above marginal production costs.

These elevated prices accelerated the adoption of new technologies for extracting oil and natural gas such as the horizontal “fracking” of shale formations. As fracking techniques were perfected, U.S. oil and gas producers saw their marginal costs decline and started to gain significant market share from incumbents such as Saudi Arabia and the OPEC oil cartel. Oil prices started to weaken in 2014 and then collapsed in 2015 as Saudi Arabia and OPEC decided to increase output and stopped supporting the market. As the low-cost global producer, OPEC’s goal was to slow the market share gains of U.S. producers by letting prices fall below the marginal costs of U.S. oil companies. Oil prices eventually bottomed in the $20’s in early 2016, which was probably at a lower level than OPEC expected, and have since recovered into a normalized range of $50-$70. Oil is currently trading at about $55 per barrel in spot markets and slightly lower in the futures markets.

How would you describe the firm’s process for picking stocks in the energy sector given that commodity prices are heavily influenced by macro-economic and geopolitical factors?

There is no question that hard-to-predict macro-economic factors, such as GDP growth, impact the price of oil which, in turn, impacts the stock prices of oil-exposed companies. While we profess no ability to make precise top-down macroeconomic forecasts we do believe it’s possible to estimate a normalized price range for oil based on the marginal cost of production. Our analysis of marginal costs suggests a normalized oil price range of $50-$70 per barrel. While prices may temporarily move outside of this band, we believe this is a defensible estimate.

As bottom-up stock pickers, our approach is to look for energy companies with the following characteristics: (1) the ability to make money if commodity prices fall to the lower end of our normalized price range, (2) meaningful self-help opportunities to improve profitability, (3) above average assets in low cost regions, and (4) management teams focused on generating free cash flow and returning capital to shareholders. While very few energy companies meet these standards, we believe that those that do offer highly attractive risk/reward profiles.

What are the biggest risks for your energy investments and how does the rising popularity of electric vehicles impact your analysis?

The single biggest risk for our energy investments is a recession. A global recession would cause a decline in demand for oil and could push oil prices below our normalized price range of $50-$70/barrel.

Regarding electric vehicles, or EVs, we don’t see a meaningful impact on oil demand over the next three to five years. Auto-related gasoline consumption currently represents about 50% of U.S. oil demand but only 30% of global demand. The latest statistics suggest EVs have captured about 2% of new vehicles sales in the U.S., 3% in Europe, and 6-7% in China. In terms of all vehicles in use, EVs are probably less than 2% and, over the last five years, haven’t had a meaningful impact on oil demand. Relative to our typical investment holding period of three years, we just don’t see EVs as a major risk to oil demand or oil prices. Ten years from now, however, the impact will be more significant since most auto makers are heavily investing in EVs and global emissions regulations seem likely to tighten.

In terms of future regulatory risks, a number of Democratic Presidential candidates have recently endorsed policies to accelerate our country’s transition away from fossil fuels. Should these policies, some of which seek to restrict fracking on federal lands, go into effect, many domestic energy companies could be negatively impacted. I would note that our energy holdings have a geographically diverse business mix. Accordingly, owning energy companies involved in oil and gas production outside of the U.S. helps to mitigate the risk of future policy changes that restrict domestic oil and gas production. If U.S. energy production were to be constrained by new regulations, then foreign energy producers would likely benefit from increased market share and/or higher commodity prices.

What has surprised you the most in the last year and what gives you confidence returns in the energy sector will improve?

I’ve been surprised by the magnitude of oil production growth from U.S. shale producers. This excess supply pressured market fundamentals more than we expected. However, we are now seeing clear evidence that production growth rates from U.S. shale producers have, in aggregate, peaked. The easy wells have been drilled and the inventory of highly profitable, simple to frack oil and gas fields is shrinking. With less aggressive supply growth out of the U.S., I believe oil markets could see more stability. I was also somewhat surprised to see investors largely disregard the attack on Saudi Arabia’s oil infrastructure.

Looking forward, our select energy investments are poised to see fundamentals inflect higher in the next 12-18 months which should enable a re-rating in share prices. Self-help plans begun in the last one to two years are starting to bear fruit and we expect many of our companies to begin generating free cash flow and returning meaningful capital to shareholders. From today’s depressed valuations, we believe our energy investments can generate favorable returns if the management teams just deliver on the plans they’ve outlined for the rest of 2019 and 2020.